No sooner had I arrived back from California than it was time to set out once again, this time to Peru, and this time with ol’ Marlon by my side. (Alright, it was actually a full week that I was back, during which little things like Christmas happened. I actually [nerdily!] just went back and made a Christmas post because we’d taken a family photo and even made a cute video and I realized I hadn’t posted them [blush emoji forever].)

We flew overnight on the 28th from Reagan to Lima, with a brief layover in Miami. (UGHHHH THEIR SKYTRAIN DOESN’T GO BETWEEN EVERY TERMINAL AND WE HAD TO WALK FOREVER TO GET FROM D TO J AND THE STAFF EVEN SEEMED TO GET SOME SICK PLEASURE FROM CONFIRMING THAT WALKING WAS THE ONLY WAY TO GET THERE. STEP IT UP, MIA.) Some free international-flight wine and Trainwreck got us through the 5.5 hours to Lima, and we arrived at 6 am totally awake and ready to go. (Peru, though located on the west coast of South America, is still in our Eastern time zone! No jet lag! Geography is wild!) (But also “totally awake” is still a gross exaggeration.)

marlon was STOKED to be one of those couples taking an airplane selfie! 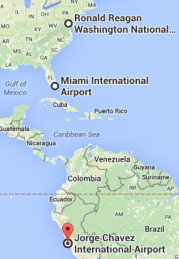 Our AirBnB was in the happenin’ Barranco district, about half-an-hour from the airport by cab. We checked in, showered, then went exploring. A few blocks from the apartment we found a little café we deemed suitable for our first meal in Peru: a chicharrón sandwich for Mar, a pejerrey sandwich for me, and lemonades we approached very timidly after being struck  by the possibility that they may have been made with tap water. (Ordering my sandwich was also kind of funny– Mar and I both have a decent command of Spanish, but didn’t recognize many of the sandwich fillings on offer. I asked the waitress which sandwiches were “sin carne,” and the first thing she mentioned was that the pejerrey was a kind of fish, which I was alright with. She then proceeded to list almost every other sandwich on the menu, including those with very vegetarian unfriendly sounding names like “salchicha” and “sangrecita.” It later dawned on us that she must have intended carne to mean “beef” only. In any case, stay tuned for later in the trip when we became VERY acquainted with pejerrey.)

After lunch we continued wandering until we found ourselves at the gorgeous murals near the city center (or “Plaza de Armas,” as we found the main square of each of the Peruvian cities we visited to be called). 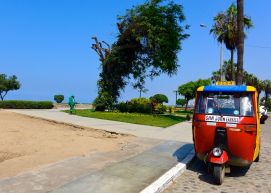 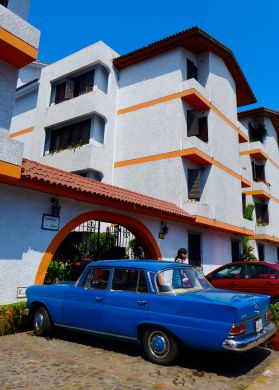 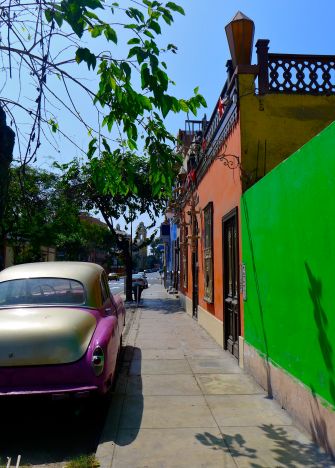 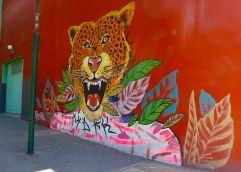 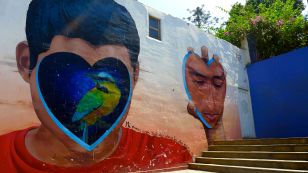 i volunteered at the smithsonian folklife fest last summer, which featured peru. elliot tupac had a work on display there, too! https://www.instagram.com/p/4rOA2Fl2vR/

I’d been in touch with Peruvian-Friend-Jess for insight and ideas during much of the trip planning, and it just so happened that our day in Lima overlapped her and Danny’s final day of their Christmas visit in the country. We didn’t have a reliable way to stay in touch, but loose “plans” had been made to meet up at our AirBnB at noon, so after taking in the murals we headed back. 12:30 rolled around without any sign of Jess and Danny; we decided we needed to maximize our time in the area, so I sent her a Facebook message saying to try meeting us in front of some museum at 2.

But what luck! As we entered the lobby on our way out, there our friends were: sweet-talking the doorman (read: exchanging two words with him, then being granted full access to the guest log, complete with full names and passport numbers), who had told them that we’d already left for the day.

With a local-friend on our side, we were easily able to hop on what would have otherwise been a very intimidating bus to make the short trek to Miraflores. Specifically, Kennedy Park in Miraflores, also known as “Cat Park,” because, oddly enough, it’s full of feral cats. We checked out some shops, then decided to get some drinks (Chilcanos/Pisco Sours, followed by coffees) on a leisurely trek to el Parque del Amor.

From there we made our way to Larcomar, a big shopping mall built into Miraflores’ seaside cliffs. I’ll admit to not having been terribly interested in Larcomar as a Lima-attraction, but it ended up being the perfect place to indulge in another perfectly Peruvian meal at Mangos (causas and ceviche) and watch the sun set.

how many cats can you spot?!

the best place to come see people making out, according to jess and danny. http://www.tripadvisor.com/ShowUserReviews-g294316-d550142-r123805490-El_Parque_del_Amor-Lima_Lima_Region.html 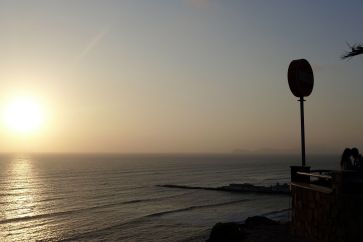 From there we went back to Barranco, where we checked out the plaza and grabbed one more round of cocktails before it was time for Jess and Danny to catch their ride to the airport. (The causas and ceviche apparently didn’t stick to Mar’s and my ribs, so we went on a mildly entertaining late-night excursion for American comforts like frozen pizza. We learned the hard way that the frozen pizza phenomenon has yet to make its way to Peru, so instead got a sub-par bottle of wine from the grocery store and a sub-par pizza to-go from a late-night pizza place.)

Our flight to Cusco was at 4 the next afternoon, so we had what ended up amounting to too much time to sort of aimlessly wander around the Barranco district again the next day. We saw some more murals, popped into the Electricity Museum, switched up our intake of South American cuisine by opting for some Venezuelan fare at Arepa Café, wandered around a bit more… Then we were off to the airport, thinking we’d be bidding farewell to Peru’s capital for at least a week. As many of you already know, we were wrong, but I’ll get to that next time. 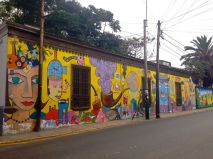