We arose in Aguas Calientes before dawn to catch our train back to Ollantaytambo, on which I took a couple more photos, but this time through an open door or window (to slightly better results). 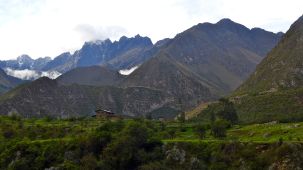 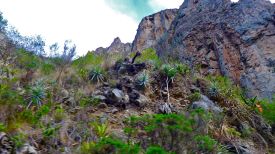 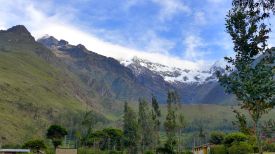 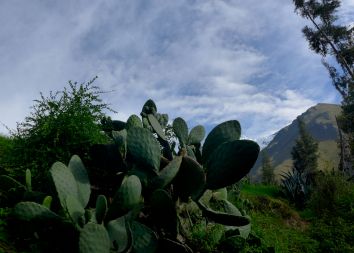 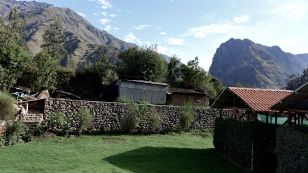 We, like everyone else, got bombarded upon our arrival to Ollanta by taxistas offering us what we noticed to be better prices back to Cusco than what we’d paid in advance for a spot on a minibus. Still, we had paid for a spot on a minibus, and so dismissed all the drivers that approached us. Finally, one lingered around long enough to ask us more information about this supposed minibus. We told him, and he assured us that that bus only came around in the afternoon.

After a series of phonecalls to the agency back in Cusco, it was determined that the lady who booked our trip on New Year’s Day had in fact erred, so the agency would just pay the taxi to drive us the hour-and-a-half back to Cusco. We made mention of the fact that we’d paid the agency more than what the taxi would cost (and had now been inconvenienced), but those appeared to be moot points.

“At least we get this whole taxi to ourselves instead of being crammed in that minibus!” we thought, until the driver stopped in the square on our way out of town and picked up another couple (who looked none too pleased that they’d be split up between the front and back seats, as Marlon and I were occupying two of the back seats already). The girl sat next to me, but didn’t seem too interested in conversing or otherwise interacting, so a good portion of my ride was spent trying not to lean into her as we made our way through the windy mountain roads. 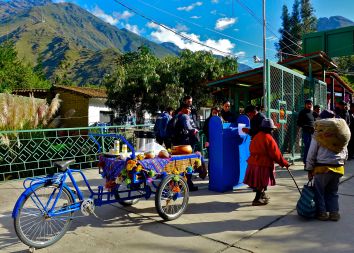 haha, this picture yielded one of my attempts to talk to my neighbor. i asked her if she thought ‘cuña’ would be a good presidente, and she stared at me for a couple seconds, and then just said, ‘acuña.’ because the presidential candidate’s name is acuña, but the first letter got cut out of my picture, see? apparently she felt politics was a private matter. 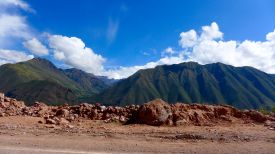 When we finally arrived we still had just about a whole day to spend in Cusco (where we’d left the bulk of our stuff up at Jay Jay’s) before catching a sleeper bus to the Lake. We finally got breakfast at Jack’s Café (the line had been insane when we tried going on New Year’s Day. But also it was so good! Go to Jack’s if you go to Cusco, even if the line is really long!), went up to Jay Jay’s to change, then did a victory lap of the Plaza area to take care of some last minute shopping. When we tired of that, we hit up Qucharitas one more time (indulged in some quinoa ice cream! That… was very much like normal vanilla ice cream haha), then, realizing the ‘Skins game was on, popped into Faces of Cusco where they were having a proper NFL Gameday, complete with a fridge full of Peruvian craft beer. Not a bad way to pass the last of our time.

Then we had to pack up and ship out to Puno on said sleeper bus. More on that later. (Spoiler: we did not get much sleep on the bus…)

the cutest coffee set at jack’s

We spent all of New Year’s Day in Cusco as well (as it turned out, the nights of New Year’s Eve and New Year’s Day were the only two consecutive nights we’d spend anywhere on the trip until reaching Arequipa, at the end). We had a leisurely morning searching for a place that was actually open for breakfast (and only reaching/settling on Paddy’s, “the highest Irish-owned pub on the planet” by lunch time). Then we did some shopping in the Plaza de Armas area, including a stroll through the huge market on Calle Santa Clara.

sid vicious, the dog. (no but they actually had very expensive suede dogs for sale in the airport that looked just like this…) 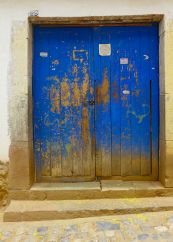 leftover yellow from the NYE celebrations 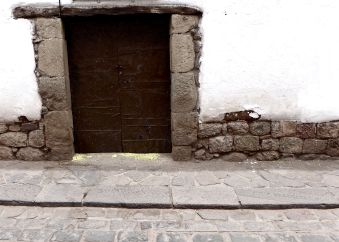 nativity parades include blackface in peru! 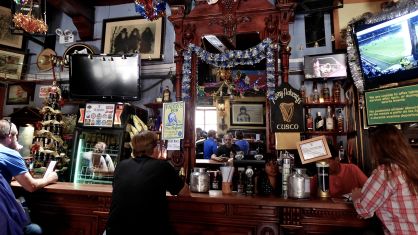 the main photo in the mirror is allegedly the winner of a mick-jagger lookalike contest in the peruvian jungle in the 70s, but i’ve found no record of it…

prickly pear, aka cactus fruit or ‘tuna.’ (the lady selling it told me it was called tuna.)

iglesia de san francisco and the carnival being held outside 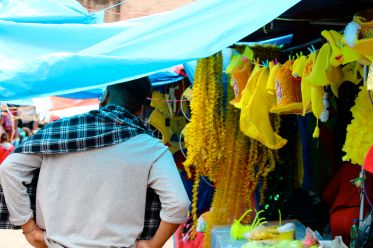 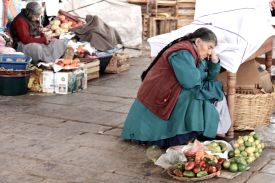 so many kinds of corn in peru! 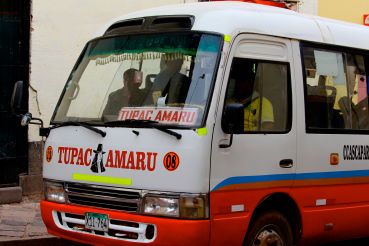 yep! tupac amaru shakur was named after a peruvian. https://en.wikipedia.org/wiki/T%C3%BApac_Amaru 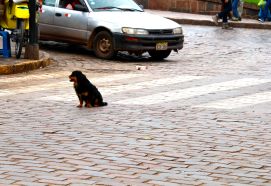 king of the streets. 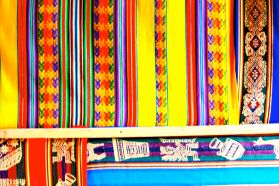 Then we went to buy our train tickets to go to Machu Picchu the next day and, surprise! It’s *super* popular to go during the New Year and there were no return trains available [that day]! So we booked a night in Aguas Calientes (the town whence you reach Machu Picchu) and it ended up being way less big of a deal than it seemed in the moment!

After recovering from the horror of having to change our travel plans (in South America! Of all places!) we grabbed some ice cream at Qucharitas– highly recommended by Jay Jay, our AirBnB host– and a road beer for the sunset trek back up the ‘mountain’ to our place. We ran into Jay Jay while snapping pictures of the stunning Mt. Ausangate in the distance. He made fun of us for looking like such tourists (NO BUT SERIOUSLY THE MOUNTAIN LOOKED SO NICE), then invited us to join him and his friend for dinner. We dropped our things off and went to join him. The two places he said he might be were both closed, but the staff at the second place (which was just in the process of closing) knew who he was and sent us in the right direction. We finally found him at Korma Sutra, a delicious Indian restaurant right in our very own Plazoleta de San Blas, had a great meal, and then went to get some sleep before setting off to Machu Picchu early the next morning. 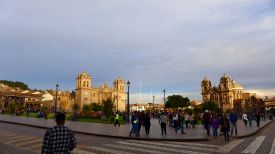 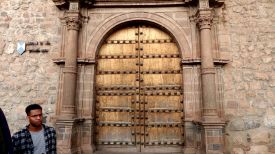 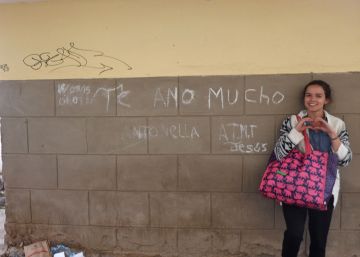 I TOLD YOU IT WAS NICE

Many of you are probably aware by now that the trip from Lima to Cusco (on December 30) had a slight hitch in that we didn’t exactly make it to Cusco on the first try. Or rather, we didn’t exactly land in Cusco, but we had a sweet flyover, and then, some time later, right after Marlon and I had mused to each other that there sure were a lot of clouds still around us, the pilot made the announcement that we’d be landing back in Lima in forty minutes. We had noticed lightning in the distance right before admiring the Cuscan rooftops, so we’ll trust in their claims of bad weather, but it was still frustrating.

sunset through the plane window as we descended to lima

We were informed that we’d be put on the 8 am flight the next day, that we needed to be to the airport at 6, that they (LAN Airlines) were putting us in a five-star hotel, and that they were organizing all necessary transport as well as a meal at the hotel. It took two hours in the notorious Lima traffic to get to the hotel (for reference, it took only ~twenty minutes to get back to the airport in the morning), so we were cranky and hungry and wishing we had more than 5 hours to sleep in the cush hotel bed before it was time to set out again, but whatever.

The next morning went just fine [thumbs up emoji] and the flight into Cusco through the Andes was once again spectacular. I… didn’t have a window seat, though. Nor do I have the permission of the stranger featured sleeping in his window seat in the gifs to share them. But voilà. 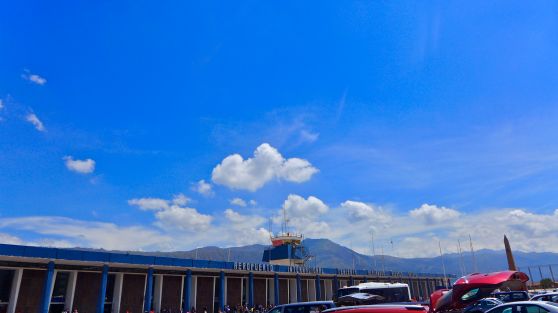 Then went against our soon-to-be-host’s advice and paid way too much for a cab to the AirBnB we had on the north side of town, in Jardines del Inca, just up the mountain from the Plazoleta de San Blas (which is right under the unfortunately-situated “16 min” tag on the below map). As in Lima, the main plaza in Cusco was the Plaza de Armas. We got situated in our room, which had an incredible view, and acquainted with our gracious and gregarious host Jay [Jay]. We thankfully didn’t feel too affected by the altitude (11,152 feet, or 3399 meters), so decided to make our way to the Plaza de Armas, by way of San Blas, with just one or two wrong turns in the narrow, labyrinthine (David Bowie reference! Drink!) streets.

view from our room 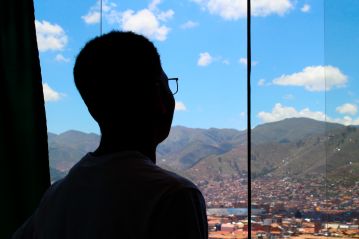 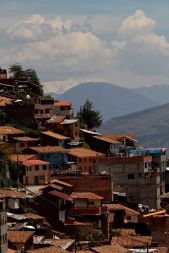 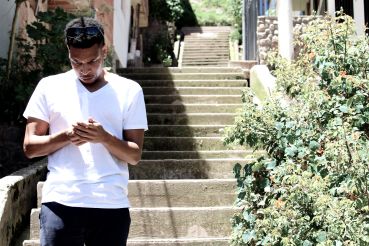 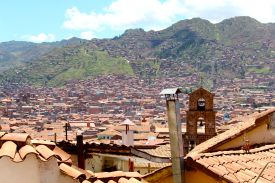 i really DO always look upset about something! 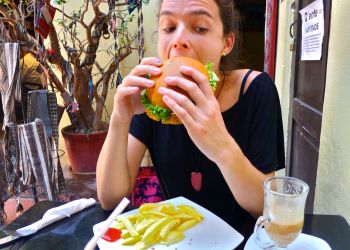 marlon always catches me at my best. chowing down on a veggie burger at http://www.themeetingplacecusco.com/

stumbling on this was a result of one of our wrong turns.

ended up having to pay for this

sacsayhuamán. or as americans were so wont to say, ‘sexy woman.’ 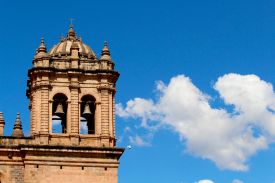 i guess this was controversial or something: http://www.cuzcoeats.com/2012/08/inca-statue-raises-more-controversy-one-year-later/

heading back to jay jay’s

When I said “up the mountain” earlier, I wasn’t exaggerating. Not only were the streets narrow, they were extremely steep, and the 1.1 km cited on the above map was almost entirely downhill on our way to the Plaza. Meaning that the 1.1 km return trip, with our lungs still adjusting to the thin air, was a little bit brutal. It got better over the couple days we were there, but we feel like we got plenty of exercise during our time in Cusco.

As the title indicates, our first day in Cusco was also New Year’s Eve! After the short night and busy morning/afternoon, we intended to get a nap to rest up for an eventful evening. Instead we trudged through the Jessica Jones pilot on our spotty wifi til it was time to get ready. Jess and Danny had told us how fun, though hectic, the celebrations in Plaza de Armas would be, so we wanted to get dinner somewhere in the area. After checking a few places’ menus, we opted for Mutu, which was serving a three-course Peruvian prix fixe menu and had a live band. We ended up being very happy with this decision. We wrapped up at about quarter to midnight, then moseyed over to the jubilant plaza. Fireworks were already being shot off in every direction (a little unsettling at times, tbh), and the Plaza was brimming with people decked out in the yellow accessories that are traditional in Peru. We kept to the edges, rather than getting sucked into the swarm in the center, but it was such a fun way to ring in 2016 (and we have the gif to prove it!).